The Benefits of Vitamin B6: Not what you’re thinking! (October 2019)

Vitamin B6 (pyridoxine) is a water-soluble vitamin first isolated in the 1930s.1 The human body cannot synthesize B6, so one must obtain this nutrient from the diet or in the form of a dietary supplement.  B6 is naturally present in many foods, added to others (like fortified breakfast cereal). B6 is a generic term for six compounds with vitamin B6 activity, namely:2,3

About B6, the U.S. National Institutes of Health (NIH) writes:

Vitamin B6 in coenzyme forms performs a wide variety of functions in the body and is extremely versatile, with involvement in more than 100 enzyme reactions, mostly concerned with protein metabolism.  Vitamin B6 also plays a role in cognitive development through the biosynthesis of neurotransmitters and in maintaining normal levels of homocysteine, an amino acid in the blood, which is a signal of inflammation.

Top Health Benefits of Vitamin B6

Balances your blood sugar — a 2015 study published in the Journal of Diabetes Research4 found vitamin B6 helped regulate blood glucose levels and insulin release in lab mice.  The study authors said, “Vitamin B6 prevents endothelial dysfunction, insulin resistance and hepatic lipid accumulation. Supplementation of [vitamin] B6 should be considered to prevent metabolic syndrome.”5

Benefits your skin and hair — Based on at least one study performed on lab rats, vitamin B6 has been shown to alleviate dermatitis, thereby promoting healthier, clearer skin.6

Bolsters your immune system — B6 is involved with the production of lymphocytes (white blood cells), which help your body fight infection. A study involving lab mice showed a lack of B6 “retards growth, inhibits lymphocyte proliferation and interferes with its differentiation,” suggesting B6 deficiency can influence immunity.7  A 2006 study done in Taiwan demonstrated that B6 supplementation has a beneficial effect on immune responses in critically ill patients.8

Boosts your brain power — Studies of pregnant and lactating women and their offspring indicate that a mother’s deficiency in vitamin B6 can alter the function of the neurotransmitters thought to play important roles in their child’s learning and memory.9

A small study involving 8- to 15-year-old children with mood and behavioral problems demonstrated a vitamin-mineral supplement containing 7 mg of B6 was effective to “exert a stabilizing effect on mood, temper and anxiety in a manner that is relatively independent of diagnostic category.”10

Protects against oxidative stress — Vitamin B6 has also been found as an antioxidant to be helpful in addressing diabetes complications, cognitive aging and the prevention of coronary heart disease.11 A 2012 study indicates a B6 deficiency that coexists with low folate or anemia was associated with depressive mood in elderly patients.12

Experts from Mayo Clinic additionally suggest B6 may be useful to control high levels of homocysteine in your blood.14 Elevated homocysteine levels may increase your risk of cardiovascular disease and stroke.  Additionally, B6 supplementation has been shown to reduce the severity of morning sickness during pregnancy, as well as soothe symptoms of premenstrual syndrome (PMS) and PMS-related depression.15,16

Clearly, vitamin B6 is a necessary nutrient hat has been shown to be useful in addressing a variety of health concerns, talk to your nutritional professional today before attempting to address any medical conditions with B6 supplementation.  Testing is the key and if blood and hair testing show a need for some support this nutrient could be invaluable in a number of key areas.

Bring in your blood test results for a wellness evaluation and 2nd opinion! Get to the causes of your conditions. 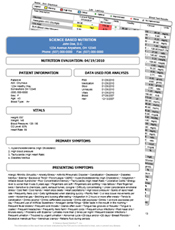 Check Us Out on: